World Premiere of the new musical The Life of Us 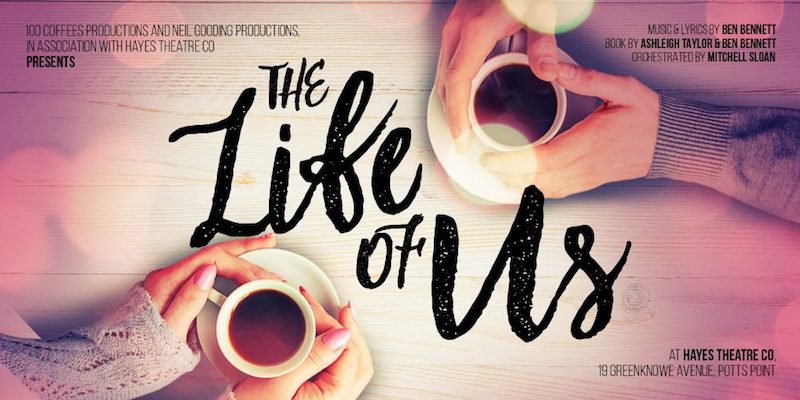 To kick off Hayes Theatre Co’s 2020 season, 100 Coffees Productions and Neil Gooding Productions have announced the World Premiere of the new musical, The Life of Us. Directed by Neil Gooding, this modern-day musical written by Ashleigh Taylor, composed and written by Ben Bennett and mentored by the legendary Stephen Schwartz (Wicked, Pippin, Godspell), is being performed at Hayes Theatre Co from 16 January 2020.

The Life of Us follows the long-distance romance of Charlie and Ellie. Forced apart by circumstance, they maintain their relationship through technology, but how much connection can a person truly feel through a screen? As we watch their lives unfold and their relationships crumble, we begin to understand what we want isn’t always what we need. The Life of Us is a modern-day musical that looks at how we love and what it means to be connected.

Performing the role of Ellie is Ashleigh Taylor, co-writer of the musical. Ashleigh’s theatre credits include the role of Sandy in Grease the Arena Spectacular and starring in the world premiere of Pleasuredome The Musical alongside Lucy Lawless in New Zealand. The role of Charlie will be played by Ben Bennett who co-wrote the book as well as composed the music and lyrics for the show. Ben was most recently seen on stage in the world premiere of Muriel’s Wedding as well as performing the lead role of Johnny in American Idiot. The role of Mike will be performed by Toby Francis (Kinky Boots, High Fidelity) while the role of Grace is being played by Pippa Grandison (Muriel’s Wedding, Georgy Girl).

The Life of Us is Australia‘s new, ground-breaking musical with the extraordinary ability to express universal feelings of love and heartbreak within a deeply affecting and intimate musical. With a knockout, emotionally powerful score that will hook you from the first note, this original production is raw, heart-wrenching and honest. If you are, have been, or hope to be in love, this show is for you.