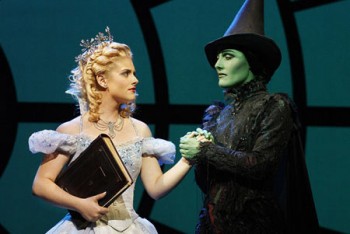 The internationally beloved musical Wicked, which just celebrated its 10th birthday on Broadway this week, will return to Australia for a 10th anniversary tour next year with a cast described by composer Stephen Schwartz as “the best cast since the original Broadway cast.” Previewing from May 7-9 and opening on May 10, 2014 for a strictly limited season at its original Australian home, the Regent Theatre in Melbourne, the production will later tour to Sydney and Brisbane.

The anniversary tour will star Lucy Durack as “Glinda” and Jemma Rix as “Elphaba”, both reprising the roles that shot them to stardom during the original Australian tour. Joining the Wicked company in his first musical theatre leading role will be Steve Danielsen as “Fiyero”, while doyenne of stage and screen Maggie Kirkpatrick returns as “Madame Morrible.” Plus, playing “Doctor Dillamond” will be Glen Hogstrom, the role of “Nessarose” will be played by newcomer Emily Cascarino and Edward Grey will play “Boq.”

This award-winning musical theatre blockbuster is currently playing in nine productions around the world, including in New York, London, Japan (Tokyo), South Korea (Seoul) and Latin America (Mexico City). Broadway’s #1 show for an unprecedented nine consecutive years, Wicked has been declared “A Cultural Phenomenon” by Variety and “The Best Musical of the Decade” by Entertainment Weekly. It has been seen by over 38 million people across the globe, grossing over $3.1 billion in worldwide box office, and its estimated more than two million people have enjoyed the Australian production.

For more information on the Australian production of Wicked, visit wickedthemusical.com.au. The musical has been dubbed “the defining musical of the decade” by The New York Times.

Photo: Lucy Durack and Jemma Rix will return to star in the new Australian season of Wicked. Photo by Jeff Busby.