The Illusionists sweep Australia this summer 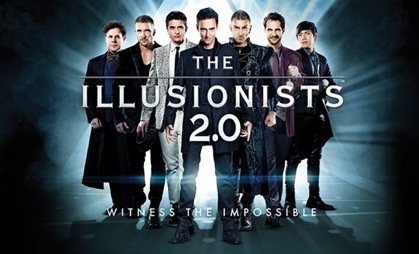 The international smash-hit that tested the boundaries of magic returns with a brand new line-up. The Illusionists 2.0 will sweep Australia this summer, set the stage alight in Adelaide, materialise in Sydney and appear in a puff of smoke in Brisbane.

Following the success of The Illusionists, the world premiere of The Illusionists 2.0 will introduce Australian audiences to seven artists that are redefining magic. Combining large-scale stunts, visual effects and 3D technology, these trail-blazing conjurers are taking the traditions of magic in all new directions. Witness the magic in Adelaide at Her Majesty’s Theatre from 27 December – 5 January, in Sydney at Sydney Opera House’s Concert Hall from 9 – 16 January, and in Brisbane at Queensland Performing Arts Centre’s Concert Hall from 19 – 27 January.

The Master Magician, Luis De Matos of Portugal, will thrill with his mega illusions. This award-winning host of the BBC’s The Magicians will leave audiences astounded by his groundbreaking mentalism.

The Warrior, Aaron Crow of Belgium, will have audiences frozen in their seats with his dangerous acts. From swords to paintball guns to crossbows, The Warrior wields his talents with a confidence that will leave you in no doubt as to how he won first place at the World Championships of Magic.

The Deceptionist, James Moore of Britain, will bring the ‘dark arts’ into the 21st century. With a personality that charms and stunts that amaze, The Deceptionist has wowed millions worldwide with his modern approach to classic magic tricks. Do not try this at home.

The Unusualist, Raymond Crowe of Australia, is the local artist breaking through the world magic scene. Part magician, part comedian, part inventor, The Unusualist has been touring the world with his uniquely Australian take on illusions.

The Hypnotist, Dr. Scott Lewis of the United States, has audiences under his spell with mind-control tricks that bring out the inner artist in his subjects. Host of the longest-running hypnosis show in Las Vegas history, The Hypnotist has been mesmerising audiences across the globe and now its Australia’s turn.

The Manipulator, Yu Ho-Jin of South Korea, will have you second-guessing your memory with his lightning fast card tricks. Fresh from his 2012 win at global magic competition FISM, The Manipulator will fool even the fastest eye.

The Futurist, Adam Trent of the United States, is the hot new name in magic. Combining classic magic tricks and cutting-edge technology, The Futurist dances his way through acts that demonstrate why he has been dubbed the ‘next big thing’ in magic.

Executive Producer Simon Painter believes this is an opportunity for audiences to experience the future of magic. Painter said, “The Illusionists was such a runaway hit when it premiered last summer, we had to keep the magic alive! After scouring the globe for the world’s best magicians, we’ve brought together seven artists that represent the next direction of magic. We can’t wait to share this exciting line-up with audiences in Adelaide, Sydney and Brisbane. These guys are fresh, exciting and will keep the audience guessing all summer.”