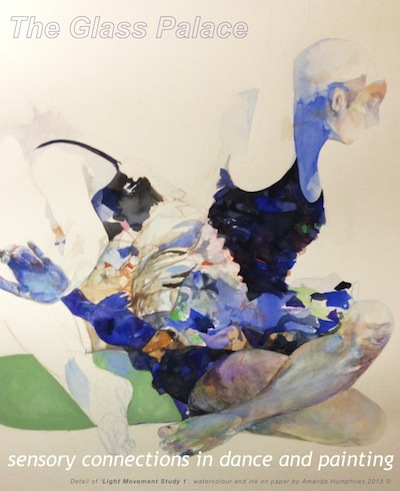 Remnant Dance embraces sensory connections in dance and painting through collaboration with visual artist Amanda Humphries to produce The Glass Palace, an Art Exhibition at the Kurongkurl Katitjin Gallery showing March 25-31. The exhibit’s official opening night is Friday, March 28 from 6 to 9 p.m.

The exhibition is a response to the latest Remnant Dance endeavor, The Myanmar Project: a creative, cross-cultural collaboration with an impoverished community of children living in Yangon, Myanmar. Through an existing partnership with the Australian charity organization MyKids Inc, and at the invitation of the in-country charity Myanmar Vision International, Remnant Dance artists travel to Myanmar in March to shoot a contemporary dance film with the children, returning in April for the international premiere of the film as part of a performance and art exhibition tour. The project is groundbreaking, not only in bridging the divide between charity organizations and artistic practitioners, but through a multi-disciplinary approach to inviting cross-cultural conversation through creative practice itself.

Humphries, a newcomer to Perth, was intrigued by the exploration of connectivity through dance-making which she encountered in the performing arts collective, Remnant Dance. She began attending dance rehearsals to sketch the figures of dancers as they moved and this gave rise to the opportunity for interdisciplinary collaboration.

“Amanda saw there were moments of connection in the dance that, though ephemeral, broke through the barriers we erect through both verbal and non-verbal communication,” observed Remnant Dance Maker, Lucinda Coleman. “As we later talked about The Myanmar Project, we all became increasingly excited at the added depth a visual artist brings to a collective of performing artists seeking to create work cross-culturally.”

Exhibiting as part of The Myanmar Project is a continuation and also new development of ideas exploring connectivity in Humphries’ individual art practice. “The art works I’ve created in the last 10 years oscillate between engaging the sensual and organic, and its counterpoint: the ever ‘sensation- simulated’ world we are offered today,” said Humphries. “With the added element of ‘Dance’ and ‘Glass’, brought about through collaboration with the Remnant Dancers and The Myanmar Project, the various disciplines contributed go through a process of accretion, giving depth and clarity to work in ideas of connectivity and in the practice of connection.”

Humphries will be presenting a collection of 15 watercolour and ink figure paintings 1500 x 1020mm that ask what does it mean to connect and explore the nature of connection in ourselves and between bodies through the metaphor of glass. Additional artworks will be developed in collaboration with children from the Andrew Youth Development Centre in Yangon, during the first visit to Myanmar in March, and will also be exhibited during the tour in April.

“The latter works will be responsive to site and the authorship of the children,” said Humphries. “The opportunity to work with the people of Myanmar in April is also timely, given their emergent presence on the world stage. Making connections through a cross-disciplinary creative project such as The Myanmar Project, taps into a universal language which facilitates positive and encouraging connections with our neighbours.”

Limited edition prints of the paintings will be available for purchase on the opening night of The Glass Palace exhibit. Half of all profits will be donated to The Myanmar Project. For more information, visit www.remnantdance.com.au.