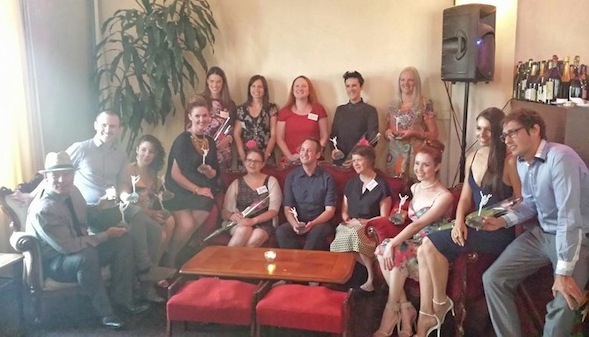 Ausdance Victoria held the 2014 Victorian Dance Awards on Tuesday, December 2. Voting had opened for the Awards on October 20 and closed on November 3. More than 4,000 votes were cast.

The Awards ceremony was presented at Acqua e Vino in Yarraville. According to Ausdance Victoria’s live social media coverage, the event witnessed “a room full of awesome, talented people being rewarded for following their passions and believing in the gifts they have.”

Called an event of “inclusion, acceptance and joy”, the Awards confirmed the importance of dance in this community and why it is “so vital to many of our lives.”

One particular award winner who stood out was Paul Malek. Malek really racked up the nominations this year, with him then winning numerous awards. He received the Service to Dance Award, was named Victoria’s Favourite Dance Producer, his Yours Truly created with Kim Adam was dubbed Victoria’s Favourite Dance Production, plus his media service, Dance Chat, was awarded.

The Dance Informa Award for Favourite Costume Designer went to Danielle Legge. Meanwhile, the Favourite Lighting Design Award was given to Nick Moloney.

Congratulations to all the 2014 Victorian Dance Awards winners!

Photo: Ausdance Victoria gathers the winners of the 2014 Victorian Dance Awards for a group shot. Photo courtesy of Ausdance.