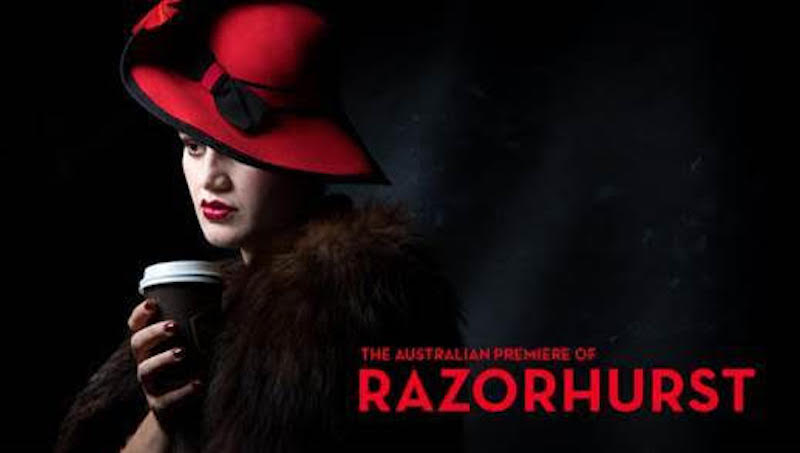 Rehearsals for Sydney’s Hayes Theatre Co’s production of the new musical RAZORHURST have started. Set in Sydney’s Darlinghurst, this exciting new musical, with book and lyrics by Kate Mulley and music by Andy Peterson, will have its Australian premiere from 14 June.

From the 1920s until the 1940s, two vice queens, Kate Leigh and Tilly Devine, ruled the Darlinghurst underworld. Their rivalry was infamous, leading to a litany of violent crimes enacted by their razor gangs as each struggled to gain dominance in a world of sly grog, narcotics and prostitution. In 2019, Kate Leigh’s former sly grog shop is about to reopen as a trendy coffee spot. The shop is being gutted for renovation, but there are still ghosts in the walls who aren’t done settling old scores.

Playing the roles of these notorious women are queens of musical theatre, Debora Krizak and Amelia Cormack. Playing the role of the infamous gangster Kate Leigh, Tilly Devine’s nemesis, is the incomparable Debora Krizak. With a slew of roles under her belt including The Producers, A Chorus Line and Anything Goes, most recently Debora played the role of another iconic Australian woman, Lola Montez, in a restaged version of the supremely successful 1958 production.

Returning to Australia after treading the boards of the West End and Broadway, and making her Hayes debut is acclaimed actor and songstress Amelia Cormack as Tilly Divine. An original Diva in Priscilla, Queen of the Desert The Musical, she performed the role in Australia and New Zealand for nearly two years, and went on to reprise the role on London’s West End. She then moved to New York and toured the US for a year with the 1st National Tour of Kinky Boots them most recently toured the US in Les Misérables.

RAZORHURST explores what it means to be a woman in a man’s world, forced into a life of crime by circumstance. At turns crass and hilarious,RAZORHURST is a “compelling meditation on the explosive cocktail of gender, class, and power underlying an infamous period in the history of crime” (Newark Star-Ledger).

New York-based director and mastermind behind this musical, Benita De Wit, returns to Australia to make her Hayes debut and says of the musical, “RAZORHURST is a two-person musical that brings to life the wickedly brilliant Kate Leigh and Tilly Devine, two female crime bosses who ran rival gangs in the Sydney underworld in the 1920s to 1940s. The show is based on true historical events, many of which unfolded in and around Darlinghurst, so naturally the Hayes is the perfect fit for this Australian premiere.”

De Wit continues, “These characters are deeply flawed. Kate Leigh and Tilly Devine were not traditional leading ladies, they were violent criminals who built empires out of drugs, alcohol and prostitution, but they also engaged in charity work and earned the respect of their community. I wanted to direct this musical because the world remains a dangerous place for women and we need more stories of women carving out their own spaces. Both of these women grew up in difficult circumstances and made lives for themselves and their families. They were far from perfect, but they were real, and they were savvy and their story deserves to be told.”

RAZORHURST was commissioned by and received its World Premiere at Luna Stage, West Orange, New Jersey.

Tickets are available now from www.hayestheatre.com.au.