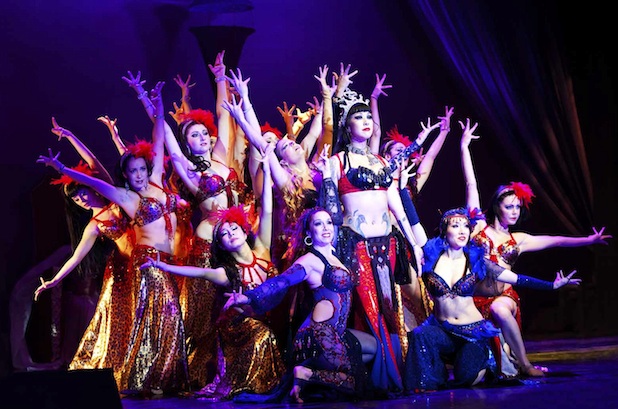 An extraordinary dance show is coming to Sydney direct from Los Angeles as part of an international tour. In this dance spectacle, no one is who they seem as a mystery unfolds of murder and deceit where love knows no bounds.

Featuring an all-star cast blended with local and international dance luminaries, the production of Dark Side of the Crown explores, celebrates and re-imagines Middle Eastern dance for the 21st century. This theatrical dance show – featuring world-renowned choreographer Jillina and a cast of international stars, Middle Eastern dancers, musicians and hip-hop artists – blends Eastern and Western dance in a dark tale.

Featuring a sumptuous mix of international culture and artistry from as far afield as Chile, Greece, Brazil, Italy, Japan, America, Moldova and Brunei, this production is produced by Bellydance Evolution.

Reviewer Michael Jaworek of The Birchmere wrote, “Jillina is certainly a ‘superstar’ in that genre and worthy of the name. Her dance and choreographic skills are brilliant.”

Dark Side of the Crown has been described as “wildly acrobatic, fierce and crowd-pleasing.” It will star choreographer Jillina as well as Kaeshi Chai, Louchia, Danielo Mendes, Twixx, Sharon Kihara, Heather Aued and Lauren Bolt.

The performance will be presented at Riverside Theatre Parramatta on Sunday, March 16 at 7:30 p.m. Dancers can also learn the repertoire at a dance workshop being hosted by Connect Studios Parramatta on Thursday, March 13 from 10 a.m. to 12:15 p.m. For more information, visit riversideparramatta.com.au.

Photo: Sharon Kihara, Jillina, Kaeshi Chai and chorus in Dark Side of the Crown. Photo by Bruno O’Hara.