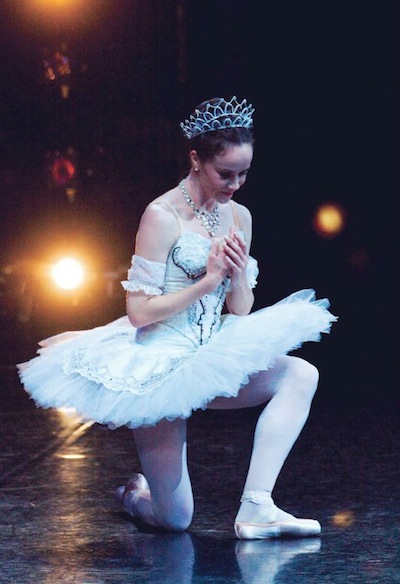 Australia’s longest serving ballerina Lucinda Dunn OAM will take her final bow at the end of the Manon season following an unprecedented 23-year career with The Australian Ballet.

One of Australia’s most beloved and respected ballerinas, the principal artist and mother of two has announced that she will retire following her final performance in Sydney on Wednesday, April 23.

David McAllister, artistic director of The Australian Ballet, said that her legacy will live on long into the future.

“One of my proudest moments as a new artistic director in 2001 was announcing that Lucinda would be promoted to principal artist. Since that time she has been a shining beacon of The Australian Ballet – a true ballerina,” McAllister said.

“Lucinda’s dancing has captivated audiences across Australia and around the world. She has inspired generations of young dancers to follow in her stellar footsteps. As the longest serving ballerina of our company, her dynamic stage presence will be missed but the treasure of her wonderful performances will live on in all of our memories long into the future,” McAllister concluded.

In announcing her decision to retire, Dunn said that she will be finishing her career on a high.

“After spending more than half my life with The Australian Ballet, it feels like a lifetime ago that I joined the company as a 17-year-old. My journey through the ranks of this special career has been marked by many memorable and unforgettable experiences, performances, partners, tours and coaches – but it is a fitting time to retire,” said Dunn.

“I’m extremely fortunate to have had a lasting career and been a part of history within The Australian Ballet, and am privileged to have had such a satisfying and inspiring career,” she concluded.

Born and raised in Sydney, Dunn won the prestigious Prix de Lausanne scholarship to study at The Royal Ballet School in London before joining The Australian Ballet in 1991.

Her sparkling career has included roles in all of the major classical ballets including Swan Lake, Sleeping Beauty and Romeo and Juliet, as well as leading roles in contemporary works by Christopher Wheeldon, Jiří Kylián and George Balanchine, to name a few.

Throughout her career Dunn has been awarded several scholarships to study overseas, and has partnered many international guests. In 2011, she celebrated 20 years with The Australian Ballet, making her the first woman to have danced 20 years consecutively with the company. In January this year, Dunn was awarded the Medal of the Order of Australia for her service to the performing arts through ballet.

To find out more about her incredible career and to book tickets to one of her final performances, visit www.australianballet.com.

Photo: Principal Artist Lucinda Dunn in Frederick Ashton’s Cinderella. Dunn said she was “thanking my partner and the audience.” Photo by Lynette Wills.