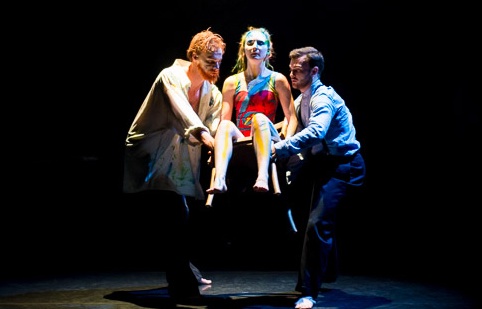 Sunshine Coast choreographer Melissa Lanham, who directs LissaJane Dance, premiered her brand new work Vincent in June 2014 at Lind Lane Theatre in Nambour, Queensland. After being applauded as a great new work that was the first of its kind in many years, Vincent was invited to perform in Europe in 2015 by the newly formed Van Gogh Europe Foundation, which will overlook the European events commemorating the 125th anniversary of Vincent Van Gogh’s death.

Lanham’s Vincent is a dance theatre work about the life of Vincent van Gogh and the mental illness he endured. It focuses on the art and prose of this great painter and how he produced such extraordinary art in his time.

“Vincent was a man of far reaching and titanic emotions that he then poured into his paintings that then spilled into his personal life,” explained Lanham in a choreographer’s note. “Never fully at ease in company, his only closest and dearest friend was his younger brother Theo who supported him emotionally and financially to the best of his ability.”

In a span of eight years, Van Gogh painted over 900 paintings. He also wrote over 1,000 letters, mostly to his brother, before finally committing suicide at the age of 37.

“It was believed that he was bi-polar and suffered from frightening delusions that would sometimes continue for weeks at a time. These only really stopped when he painted,” Lanham stated.

Performed by a cast of three Australia-based contemporary dancers (Andrew Haycroft, Michael Smith and Chloe Lanham), Vincent will tour to the Netherlands, Belgium and France in 2015, in addition to performing at the 2015 Zundert Van Gogh Festival in Van Gogh’s hometown.

Lanham was first drawn to the idea of this production when she was swept away by Van Gogh’s Sunflowers painting at the National Gallery in London.

“For some reason, this was the first painting that I always gravitated too. Looking at the painting in real life is a sight to behold,” she stated. “…Looking at his work up close is quite an emotional experience and forces you to see this man’s life in its reality – it was then that I knew his life was a project I wanted to create through dance.”

“This is a very special achievement for this vibrant regional community, to have a professional dance work made locally,” said Ann McLean, head of Ausdance Queensland.

“Not to mention the themes of this work being so important for everyone in our community,” McLean added. “Depression, anxiety, bi-polar disorder affect many in our community, and this work shows how people can do great things despite these burdens.”

In addition to its 2015 European tour, Vincent will be re-presented by Lanham’s LissaJane Dance in Australia in 2016. International production and tour management is being supplied by GoslingProductions, with performances in Victoria and South Australia on the radar.