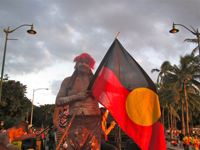 Descendance Aboriginal and Torres Strait Islander Dance Theatre has toured Hawaii for seven successive years, but the 2011 tour will now be remembered for the tsunami which was due to hit the islands on Friday March 11th at 3am, in the aftermath of the Japanese earthquake. Honolulu was in a state of frenzy as sirens and public announcements roared throughout the city with warnings of the coming tsunami. Descendance performers kept their composure throughout the ordeal and the wave eventually lost momentum on its journey across the Pacific before it reached the shores of Waikiki.

Descendance were the featured artists at the 17th Honolulu Festival, Hawaii’s premier cultural event, which culminated in a grand parade of pacific countries performing across the city and down to Waikiki beach. 2011 saw an audience of over 200,000. The festival was again a great success in tribute to the disaster victims in Japan. Descendance performances were once again powered with energy and passion as their popularity in Hawaii reached new heights. www.descendance.com.au