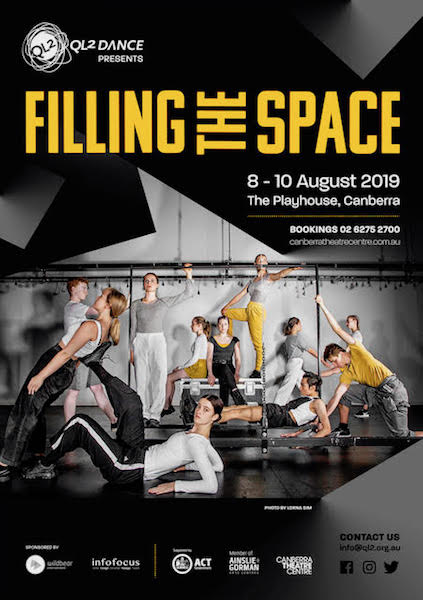 Filling the Space opens at Canberra Theatre Centre Playhouse on 8 August for three days. The Quantum Leap Ensemble explores the dynamic relationship of body and architecture. It breaks open the frames and borders that guide movement in and out of space/s and playfully manipulates the emotional relationship to them. The theatre stage becomes a world of potential, of space filling and emptying, of new cosmic dances.

Dancer Chris Wade says “The thing I’ve adopted most from the learning and creative process of ‘Filling the Space’ is that the deep connection we have with spaces (familiar or otherwise) is not to be taken for granted because they can affect us in many ways.”

Dancer Hollie Knowles says ”The connection between spaces and emotions are incredibly deep and hold immense meaning and value that I had never thought of or explored before. Working with Eliza allowed me to tap into certain emotions and triggers which then became some of my most loved movements.”