‘EMPIRE’ will return to Sydney for summer 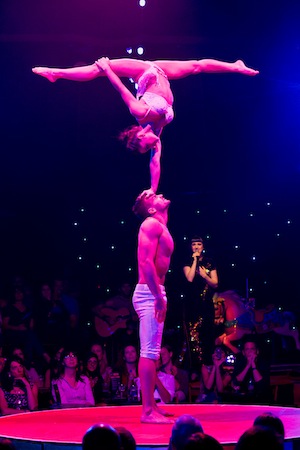 Since EMPIRE by Spiegelworld opened its Australian tour in Sydney in January this year, it has been seen by over 130,000 people around the country with rave reviews, sold out performances and standing ovations. Now Spiegelworld has announced that EMPIRE will return to Sydney’s Entertainment Quarter in the beautiful spiegeltent from January 7, 2014.

When EMPIRE was last in Sydney, The Sun Herald awarded the show a rare “10/10.” The return Sydney season of EMPIRE now follows spectacular engagements in Melbourne, Brisbane, Perth and Adelaide that left audiences amazed and breathless.

Presented in Spiegelworld’s 700-seat antique spiegeltent, EMPIRE smashes the boundaries of circus, cabaret, vaudeville and burlesque, reinventing the genres for a 21st century audience. Featuring some of the sexiest, most daring artists from across the globe, the show had its world premiere season in New York City during the summer of 2012, where it was the first tented show ever seen in Times Square.

EMPIRE is a 90-minute theatrobatic adventure performed by some the greatest international talent ever assembled in one tent. The MCs, Oscar and Fanny, steer the show while an eccentric cast of characters help Oscar rebuild his empire; the seductive Gorilla Girls from Ukraine form perfectly balanced pyramids on top of each other and the Ethiopian foot juggler Black Flintstone throws and impossibly catches his brother Big Mac Boy on his feet. Other performers include the Lime Green Lady and Carrot Man who beautifully and sensuously balance each other; Miss A in a Bubble contorts gracefully inside an aerial sphere; and the 3D Graffiti Guy from Canada creates amazing structures, balanced entirely on a feather. Miss Purple is the resident vocalist and is backed by the Viking of 6th Avenue, Moondog.

Spiegelworld first presented its annual summer season in New York City in 2006 on Pier 17 at South Street Seaport with acclaimed shows including Absinthe, La Vie, Gazillionaire’s Late Night Lounge and Desir. For the world premiere season of EMPIRE last year, Spiegelworld relocated to a premium vacant lot right in the heart of Broadway. Spiegelworld is also currently presenting Absinthe on the forecourt of Caesar’s Palace in Las Vegas, now in its 20th sold-out month and recently extended through to 2015.

Tickets for EMPIRE’s Sydney season are now on sale at www.ticketek.com.au.