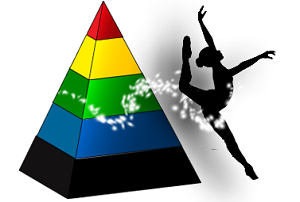 Adelaide Festival Centre’s Performing Arts Collection will exhibit material from a new form of dance composition in the ChoreoCraft Exhibition from 25 – 30 May.

ChoreoCraft helps bridge the gap between dance training and choreography, integrating the two in a seamless syllabus, tailored to any age or ability.

Kenneth Norman devised a notation system based on a five layered pyramid, relating to the five Greek elements. Combined with up to 200 other tools, countless combinations can be created to drive choreography.

Although he has taught this method for many years, the exhibition will showcase the debut to the public of Kenneth’s intriguing new method of dance composition teaching in Australia, and will include examples of his notation, pictures, documents, and composition aids.

Kenneth Norman has successfully taught ChoreoCraft in the UK, Hong Kong, Singapore, Taiwan and New Zealand before settling on our soils.

ChoreoCraft’s creator Kenneth Norman says, “Most theatre-going patrons familiar with plays, concerts and ballets have a general idea that plays are created and recorded by writing the various characters’ words on paper. Similarly, most have a general understanding that music is composed and recorded by writing the music notes on manuscript paper. However for the theatre-going public at large…the means by which ballets are recorded on paper is a deep mystery!”

The ChoreoCraft exhibition will be shown during the Adelaide season of The Australian Ballet’s Romeo & Juliet.

Entry if free and the exhibit will be open from 9am-6pm and performance times.