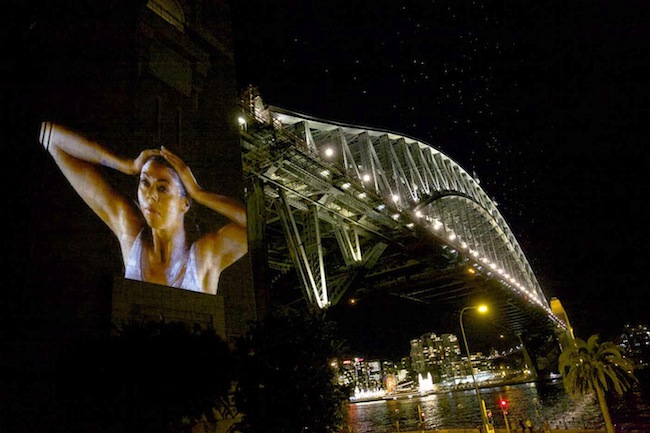 In 2014, Bangarra Dance Theatre celebrates its 25th anniversary. To mark this significant milestone, the company will participate for the first time in Vivid Sydney, presenting a free light installation entitled The spirit of Patyegarang, as part of the Vivid Light program, for the duration of the festival.

Vivid Sydney is the Southern Hemisphere’s largest festival of light, music and ideas, which for 18 days transforms the Harbour City with its colourful creative canvas. Running now through June 9, The spirit of Patyegarang is the first Indigenous contribution to the Vivid Light Walk, and brings to life a fascinating story from our country’s past.

Bangarra will awaken the spirit of Patyegarang, a young Eora woman, on the land she lived on over 200 years ago. At the time of the settlements, Patyegarang befriended First Fleet astronomer Lieutenant William Dawes as he was observing the skies from the promontory that now bears his name.

Projected onto the sandstone blocks of the Sydney Harbour Bridge southern pylon, The spirit of Patyegarang is a three-minute large-scale video commemorating one of the earliest collaborations between the original custodians of the land and the new settlers, inspiring residents and visitors with the sensations and emotions of first contact.

Weaving their creative energies together, leading Aboriginal artists Stephen Page (Bangarra Dance Theatre’s Artistic Director and Choreographer) and Jacob Nash (Designer and Creative Video Director) have joined forces to create a cultural experience that blends the contemporary with the traditional, bringing Bangarra outside of a theatre space for Sydney residents and visitors to discover and enjoy.

The light installation will be a powerful prelude to Bangarra Dance Theatre’s upcoming production of Patyegarang, which will have its world premiere at the Sydney Opera House on June 13-July 5.

Page said, “The spirit of Patyegarang is Bangarra’s way of telling a story that is so important to Australia’s past by re–awakening the spirit of an Eora woman on her land, remembering ‘first contact’ with a moving encounter: one of curiosity, exchange and understanding. This is also a gift to the Eora nation and the community who adopted Bangarra on their country. By projecting Bangarra on the southern pylon of the Sydney Harbour Bridge as part of Vivid Sydney, we bring Bangarra to the world, outside of the theatre, for all Australians and visitors to experience our rich Indigenous history.”

Ignatius Jones, the Creative Director of Vivid, added, “I am incredibly excited to be working with Bangarra on a major installation that speaks so powerfully to the very earth on which Vivid Sydney happens. I have always steered away from including Indigenous content for purely gratuitous or tokenistic reasons, but to be able to salute Patyegarang, the living spirit of Dawes Point, is a privilege and an honour. And so very, very right…The story of Patyegarang and William Dawes invokes a magical collaboration between our first peoples and those of us who came after – and echoes, in a way, how the Vivid team has worked with Stephen Page and Jacob Nash to enable Patyegarang’s spirit to reach out from the stones of the Sydney Harbour Bridge and into the modern Australian consciousness.”

The spirit of Patyegarang is a free installation that will run for the duration of Vivid Sydney each evening from 6 p.m. until midnight.

For tickets for the world premiere season of Patyegarang, visit www.sydneyoperahouse.com/bangarra or call the Sydney Opera House Box Office at 02 9250 1777.

Photo: The spirit of Patyegarang installation. Photo by Jacob Nash.