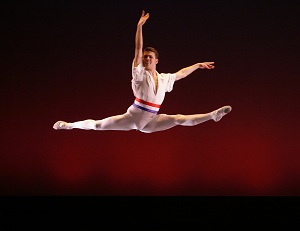 Queenslander Aaron Smyth has signed a contract with The Royal Ballet.  He has been doing classes in London for a few weeks now and his contract takes effect immediately. After dancing twice in the final of the Sydney Eisteddfod McDonald’s Ballet Scholarship, finishing fourth in Australia’s got Talent, winning the 2008 Genée Competition and wowing audiences with his performances as a member of ABT2, Aaron has found his place with one of the world’s top companies.

A dancer of rare personality with a technique to match, Aaron has been attracting attention in world dance circles ever since he left Australia in 2008. Last year, when he danced the Pas de Deux from Le Corsaire with his Gold Coast classmate Claudia Dean at the Sydney Eisteddfod McDonald’s Ballet Scholarship final, the entire audience rose screaming to its feet.  After graduating from The Royal Ballet School with the Most Outstanding Student Award, Claudia joined the company last year, while Aaron arrived at Covent Garden by a more roundabout way after studying at the Jacqueline Onassis School at the American Ballet Theatre.   Now, at the age of 20, Aaron is poised to pit his skills against the world’s best.  He has a real star quality and as he has finally found a stage worthy of his talent, Australia wishes him luck.