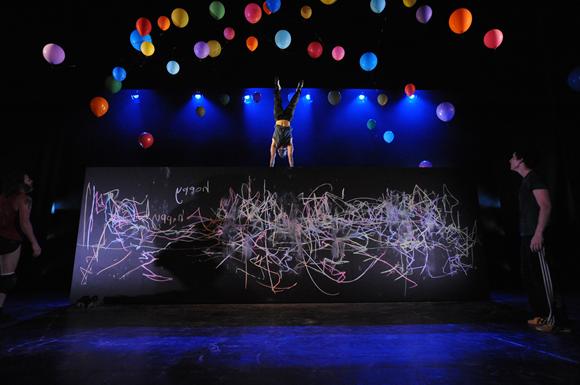 After an astonishing UK tour, Shaun Parker & Company will be beginning their two-month-long Australian tour of Happy as Larry in Orange, before travelling to selected regional venues in NSW, VIC, SA, NT and WA.

The cast of characters is developed from the Enneagram, a psychological system that maps nine personality types: the Perfectionist; the Giver; the Performer; the Tragic Romantic; the Observer; the Devil’s Advocate; the Optimist; the Boss; and the Mediator – all rich inspiration for Shaun Parker’s insightful creativity. Set to a vibrant electro/acoustic score, the performers bring fun and danger to the fore in this innovative and moving dance work.

On Happy as Larry, the Sydney Morning Herald said, “It’s smiles all round – on stage and in the audience. You have to welcome a dance piece about happiness… delightful.” The Times UK echoed that it was a “highly enjoyable production,” saying, “Parker always has something up his sleeve.”

The tour is a part of Dance on Tour, a program supporting four Australian dance companies to nationally tour a full-length work in 2013. The other three companies are Australian Dance Theatre, KAGE and Expressions Dance Company, which is just concluding its tour of Natalie Weir’s R&J. The overall goal is to market, attract and build new audiences for dance.

For more information on the Happy as Larry regional tour dates, visit danceontour.com.au.

Photo courtesy of Dance on Tour and Shaun Parker & Company’s Happy as Larry.