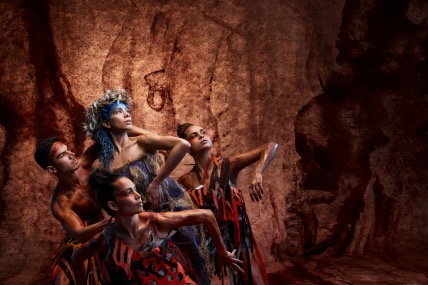 Created by Bangarra Dance Theatre in consultation with Wangkajunga/Walmajarri Elders from the Kimberley and Great Sandy Desert regions, SandSong has been choreographed by Bangarra Artistic Director, Stephen Page, a descendant of the Nunukul people and Munaldjali clan of the Yugambeh Nation, and Bangarra Associate Artistic Director, Frances Rings, a descendant of the Kokatha Tribe from the West Coast of South Australia.

Under the vast Kimberley sky, the red pindan dust stretches across the desert homelands of the Walmajarri, where the ancient knowledge of People and of Country is preserved through Songlines that have endured for hundreds of generations.

SandSong tells the unique story of this Place and the survival of its People, where between the 1920s and 1960s, Aboriginal people were removed off their Country and forced into hard labour for no wages and minimal rations. Despite this displacement and cultural disruption, the people of the Western Desert have maintained unbroken connection to their Land, keeping stories and kinship strong.

This is also the Country of Wangkajunga woman Ningali Josie Lawford-Wolf (1967-2019), an acclaimed performer and an important cultural consultant and artistic collaborator of Bangarra, whose spirit, stories and artistic contributions have inspired a number of the company’s works, and enriched the broader arts landscape. SandSong honours the legacy of Ningali, and her family – past, present and future.

Bangarra Artistic Director, Stephen Page said: “In 2020, when we started the research for SandSong, the world was a different place. Our remote Indigenous communities, once described as “lifestyle choices”, became more crucial than ever as they functioned as refuges to protect our most precious resource: our Elders.”

Shared through a dance theatre language that is truly unique in the world, and performed by Bangarra’s internationally-acclaimed dance ensemble, SandSong is a journey into ancient story systems framed against the backdrop of ever-changing government policy, and of the survival of people determined to hold strong to their Culture.

Tickets for Bangarra’s 2021 national tour are available now from https://www.bangarra.com.au/.